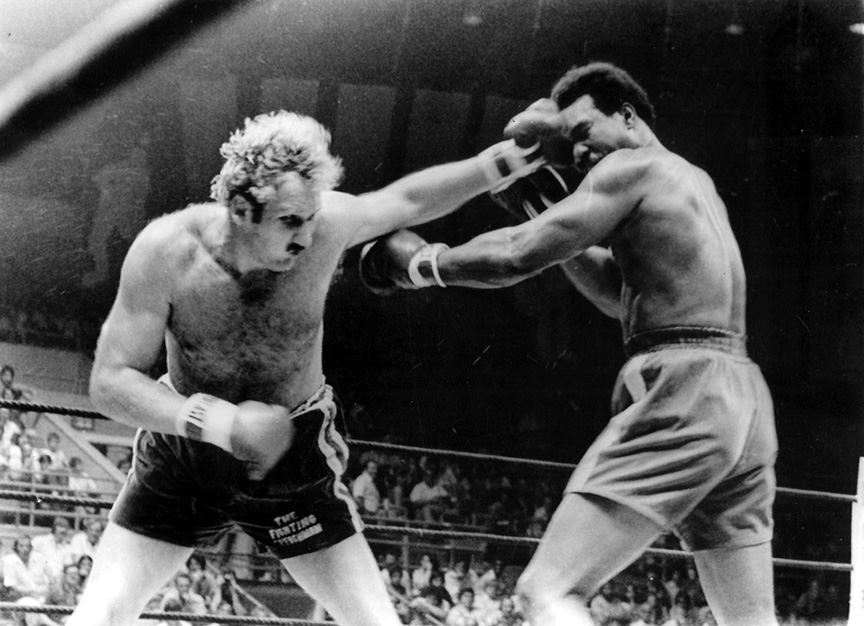 Welcome to the first profile of my (hopefully) final restructuring of this project. Yes, I know I’m starting off with 209, but don’t let that fool you – this is still the Greatest 200 Heavyweights of All-Time. It made sense to have a few extra just to ensure completeness. LeDoux was a tough fighter whose final record makes him look like little more than a tough gatekeeper. And that’s certainly what he eventually became. But he was also a victim of bad timing, having started his career at the tail-end of a remarkably deep era for heavyweights. When he finally developed into a contender, many of the biggest possible names had retired, but there was still enough talent to keep LeDoux from major success.

A strong, stocky man who came along in an era of rapid physical expansion, he fit in well with the new status quo of heavyweights weighing consistently over 200 pounds. LeDoux himself never weighed below 217. He was a decorated amateur in the 60s and early 70s, and didn’t turn pro until a relatively old 25. But that amateur experience served him well as he started off his pro career with a 12-0(9) record against the usual gatekeepers and journeymen. A surprise stoppage loss to one of those journeymen in his thirteenth fight (caused by a cut) was followed by a win over fringe contender Rod Bobick in an all-Minnesota showdown, a TKO win over gatekeeper Terry Daniels, and a fortunate draw to longtime journeyman and all-around tough guy George “Scrap Iron” Johnson. His competition improved further, with a narrow decision over former contender Larry Middleton, leading up to his first fight with a full-fledged top-ten contender, Duane Bobick. The two biggest names in Minnesota boxing at the time, Duane was looking to exact revenge for his brother’s loss to LeDoux a year earlier. The more talented Bobick succeeded, winning by decision. LeDoux would return with a fight against prospect John Dino Dennis, dropping another decision. This was followed two months later with a 3 round blowout loss to former champion George Foreman.

The now-18-4-1 LeDoux seemed to have found his ceiling. He beat a clubfighter three months after the Foreman loss, then lost a close decision to up and coming contender Johnny Boudreaux. Two wins against lesser competition came next, followed by a rematch with Duane Bobick. This time, Bobick stopped him in eight. LeDoux wouldn’t have been blamed for calling it quits, but instead was back in the ring three months after the Bobick fight, this time against blue-chip prospect (and former Olympian) Leon Spinks. He managed to hold Spinks to a draw, keeping himself relevant as a solid opponent in the heavyweight scene.

Another draw, then four straight knockout wins led to a fight against another big name, in former title-challenger Ron Lyle. LeDoux gave a good accounting of himself, knocking Lyle down and losing by a narrow split decision. This led to another tough matchup, taking on future-hall-of-famer Ken Norton, this time fighting to a draw. He managed to knock down Norton twice in the 10th round, and arguably pushed Norton out of contention. He finished the year losing a competitive decision to contender Mike Weaver. Despite 2 losses and a draw, the nature of his opponents and the closeness of the bouts allowed LeDoux to finish 1979 with a top-ten ranking.

It would also be the last year where he was considered a legitimate threat to any heavyweight titles. A win over a prospect followed up with a fight against Larry Holmes, who was easily the top fighter in the division, and one fight away from claiming the lineal crown. Holmes made easy work of LeDoux, stopping him in 7 one-sided rounds.

From there, LeDoux’s career settled into a pattern – a win or two over a journeyman or fringe contender, followed with a knockout loss to a top contender. Over the next three years, Le Doux went 7-1 against those fringe opponents, and was blown out in between by Greg Page, Gerrie Coetzee, and finally Frank Bruno, who ended his career after just 3 rounds.

Scott LeDoux would later become a boxing analyst on ESPN, the head of the Minnesota Boxing Commission, and did a great deal of charitable work before dying of Lou Gehrig’s disease in 2011.

LeDoux was not a great fighter. But he was a good one, who crammed a lot of action and excitement into 9 fairly short years. He gave good fighters good fights, even though he rarely handled defeat well. He never quite broke through, but he fought his way to the brink for a time.