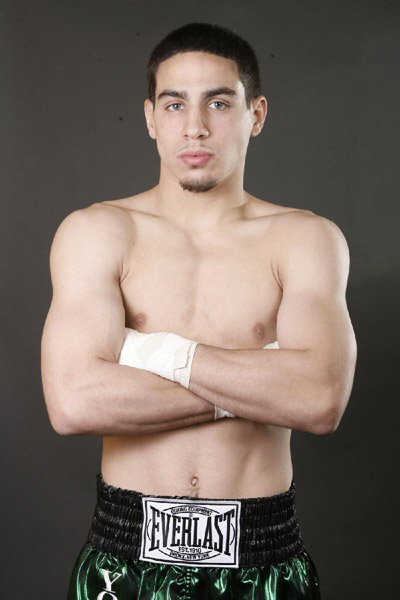 It was an interesting night of fights on NBC Saturday night. Boxing returned for the second time this year on network television, showcasing world-class fighters in decent matchups. Middleweight contenders Andy Lee and Peter Quillin fought to a somewhat entertaining draw. Despite some protests from the crowd, the decision seemed fair to these eyes. In the headline fight, junior welterweight champion Danny Garcia won a majority decision over contender Lamont Peterson in a non-title fight contested at a rather odd 143 pound limit.

In the preliminary bout, the Brooklyn-residing Quillin lost his chance at the alphabet bauble currently held by Andy Lee, by failing to make weight Friday afternoon. The lanky Lee had no such trouble, and would have retained his trinket, win, lose, or draw. Quillin clearly had recovered from any dehydrating the day before, and started the fight noticeably stronger, quicker, and seemingly more durable.

The two men fenced early in the first, mostly pawing with jabs, until only 25 seconds remained in the round. Quillin exploded, and landed a big cross that dropped Lee and clearly hurt him. The two exchanged after Lee rose, and Lee was knocked back into a neutral corner, and almost dropped again just after the bell. The second round went much the same way. Both fighters stood just outside of punching range for most of the round, pawing with jabs and occasionally lunging in with crosses. With 20 seconds left in the round, Quillin lept forward, landing alternating right and left hooks, driving Lee back, though Andy kept his feet this time, and fired back, losing the exchange, but establishing his toughness.

Round 3 was a little more active. A counter right, combined with Quillin’s foot stepping on Lee’s, put Lee down for the second time halfway through the round. He rose unhurt, and fought back gamely, largely winning the round were it not for the somewhat questionable knockdown. Both men reverted to fencing with jabs in the 4th. Lee’s length and timing helped compensate for Quillin’s edge in speed, and he narrowly won the round on my card. Rounds 5 and 6 were both close. Quillin was marginally quicker. Neither man was particularly active. When Lee snapped his jab, he could land it cleanly, but he generally pawed with it and waved in Quillin’s face, ala Wladimir Klitschko. Quillin marginally outworked Lee in those rounds, but this observer could see Lee gaining confidence and getting more comfortable in there.

After 6 rounds, I had scored the fight 59-53 for Quillin, with him winning 5 of the 6 rounds, though 4-6 were all pretty close. Quillin seemed to slow down in the 7th, which was already a pretty clear Lee round up to the 25 second mark. Lee missed a left cross, but solidly connected with a big right hook that put Quillin down. Quillin got back up, and seemed to recover quickly, but that moment marked a turning point. Lee found he could hurt Quillin, and Quillin seemed to be wilting.

“Irish” Andy kept the momentum on his side through rounds 8 and 9. Neither man was particularly active, but Lee did a better job of spearing Quillin with long jabs and occasional lunging crosses to the body. Quillin picked it up a bit in round 10, landing well early, and showing off his speed advantage. The 10th had a little more action and less posing. Both men were clearly still looking for the homerun in the 11th. They went back to circling and posing, which suited the longer, more disciplined Lee a little more. Andy landed a couple good crosses late in the round to seal it. Going into the 12th, there was the feeling that the fight was up for grabs. The 12th started faster than prior rounds, with Lee working to establish the jab that he had largely neglected in the first half of the fight. Quillin continued looking for a big bomb to end it. Peter Quillin landed a couple good shots at the end of the round, though on my scorecard, Lee did just enough through the first 2 and a half minutes of the round to get the nod.

After tallying my scorecards, I had Peter Quillin up 113-112, the difference being mostly due to him scoring two knockdowns to Lee’s one. The 6th round was tough for me to score, and I could easily have seen it as a Lee round, which would have made the fight a narrow Lee win. After early shock-and-awe tactics by the explosive Quillin, Lee managed to work his way back in the fight and make it close. Quillin seemed to lose steam as the fight wore on, and both men were clearly hesitant, thanks to the other’s punching power.

The official scorecards were read as 113-112 Quillin, 113-112 Lee, and 113-113, making for a split draw, that most observers agreed was fair. Despite the low punch output, it was a weirdly entertaining and tense fight. Most rounds featured two and a half minutes of circling, punctuated by half a minute of explosive trading. Lee was a little better schooled, and used his timing and reach to overcome Quillin’s superior speed and athleticism during the circling part, and he managed to just survive the early round trading and hold his own in the later rounds.

The general perception before the fight was that this was Quillin’s fight to lose, and that Andy Lee had enjoyed a nice recent run, but was operating on borrowed time. Eventually his big right hook wouldn’t save him late in a fight. Well, this time, it worked a little differently. Both men fought economically, and both showed flashes of talent. However, neither showed that they would be a true threat to the best fighter in the division, Gennady Golovkin. And linear champion Miguel Cotto had to see both as potential future opponents. Either one would be a credible contender for Cotto to fight, and both would likely lose to the undersized middleweight champ, based on their performance Saturday night.

The main event Saturday was a good fight on paper. Top 5 junior welterweight Lamont Peterson challenged linear champion Danny Garcia. That alone is always a good sign for competiveness, as well as divisional clarity. However, as Garcia slowly edges his way up to welterweight, he has demanded catchweights. This fight was officially contested at 143 pounds, technically making it a welterweight fight, and ensuring that Danny’s linear championship would not be on the line. This deflated some of the significance from the fight. Garcia has lost a lot of public goodwill over the last year. His questionable win over Mauricio Herrera was followed by a pretty awful mismatch over undersized and outgunned club fighter Rod Salka. Anything other than a dominating win over Peterson would likely erode even more goodwill.

Lamont Peterson started out immediately backpedaling. Garcia followed, not cutting off the ring, but continually lunging forward, missing with jabs, and landing the occasional digging body shot. Most of the 1st round played like a bullfight, with Peterson in the role of matador. Danny managed a couple good crosses midway through the round, while Peterson flicked out jabs and mostly dodged and juked. The second through seventh rounds all continued this pattern. Peterson would jab (and he constantly barked as he jabbed, in the worst Devon Alexander tradition) and move, except he landed almost nothing. Garcia would stalk after him, missing most of his shots, too. Garcia did do a pretty good job slipping the rare punch thrown by Peterson, and while neither connected much, Garcia did land decent hooks and crosses to the body as Peterson moved. Judging by the fighter’s facial expressions, and the chatter in the corners between rounds, Peterson seemed to be dominating. However, the only one connecting solid punches throughout the first half of the fight was Danny Garcia.

In the 8th round, Peterson stopped backpedaling, and started opening up his offense. The switch worked, and clearly caught Garcia off guard. Peterson backed him up, initiated several good exchanges, and won his first round on my card with speed and aggression. The 9th round started the same, with Peterson as the aggressor, pushing the pace, and landing good shots. But Danny worked his way back, and was winning the exchanges in the second half of the round. Garcia narrowly won the 9th on my card, though arguments for both fighters could be made. The 10th round saw a return to the tactics of the early rounds, with Peterson moving and dancing again, and neither man landing much of note. Garcia nicked the round in my eyes.

Lamont came out harder in the 11th, dictated the pace of the round, and pressured Garcia well. Danny landed some decent shots, but Peterson was clearly the fresher fighter. Major swelling began appearing under Danny’s right eye. Peterson continued the fast pace in the 12th, making Garcia work. Peterson landed better shots in the first half, though Garcia connected better in the second. Both fighters made an argument for the last round, but Peterson’s ring generalship won it for me.

When the scores were being tallied, the general air was one of confidence for Peterson and fatigue and dejection from Garcia. Danny was marked up worse, and noticeably wearing down in the late rounds. However, Peterson was largely ineffective on offense in the first half. He made Garcia miss, but landed little of note until he started coming forward in the 8th. The final scores were close, 114-114, and 115-113 twice for Garcia. Peterson didn’t argue too hard with the decision, though it was clear he thought he earned it.

My final score was 117-111 Garcia. The first seven rounds were all close, but only one fighter (Garcia) was actually connecting with any power during those frames, even though he missed quite a bit, too.

Much of the post-fight discussion on the message boards consisted of disapproval with Danny Garcia in general, and the sense that his visible frustration meant he was losing much of the early rounds. “Ring generalship” was thrown around by many keyboard warriors. However, making a fighter miss without throwing anything back only wins rounds if your name is Willie Pep. Peterson certainly looked good late, and Garcia faded badly in the final rounds. But fights are scored one round at a time. If one fighter wins 7 or 8 rounds close, and loses 4 or 5 wide, he still wins the fight. Peterson dealt with something similar to this a few years ago when he fought Tim Bradley. In that fight, Peterson fought well, and was competitive in every round. The problem was that he lost almost every round, leading to scorecards that didn’t quite reflect the true nature of the fight. That’s similar to what we saw Saturday night.

Boxing returning to NBC can only be good for a sport that has spent the better part of the last two decades marginalized and confined to the fringes of the sports world. The highest level of the sport can usually only be viewed on premium cable, or pay-per-view. This return to the mainstream is a gamble that the public can support boxing as a more mainstream sport. Time will tell if this lasts, but thus far, NBC (and Al Haymon) has managed to get network boxing off to a pretty good start. Neither fight this past Saturday was amazing, but they were both competitive, and had their share of drama. It would be nice if fights like next week’s Provodnikov-Matthysse matchup could be showcased on network television. Fights like that between two big-punching action fighters would get the watercooler discussions back on the topic of boxing. For now, any improvement is a good thing. And Saturday night certainly counts as improvement.